As someone who lives on their own and is really not a fan of sandwiches I often find it hard to know what to have for lunch at work. The easiest solution to this terrible dilemma I’ve found is making a large quantity of something on a Sunday afternoon and then enjoying it throughout the week. Pastitzio (technically a Greek dish) is one of my favourite dishes to batch make. (Some might even say a ‘batch’ made in heaven… get it?) While it can be slow to make the recipe is fairly simple and open to improvisation and innovation wherever and whenever desired. (It also freezes well so you could make double quantities and keep a whole tray-load in the freezer if you fancy!) If you’re someone who really likes a recipe to follow I loosely base mine from THIS recipe however I’ve found many different variations that all taste great! The first time I made Pastitzio I had no clue what it was called and was following my parents instructions around 8 years ago – all I knew is that I was making ‘pasta bake’.

Before going any further I will say I don’t plan on going through the specifics of a single recipe as I tend to improvise a bit – but don’t let that stop you from reading on! 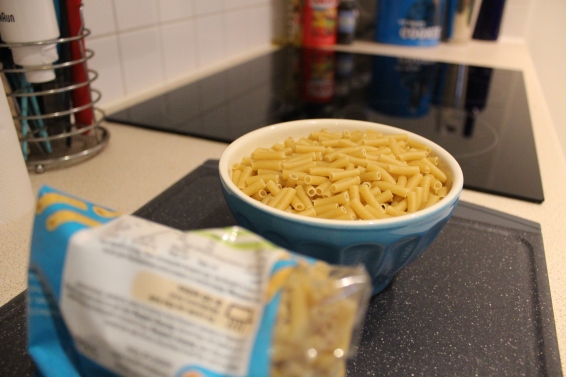 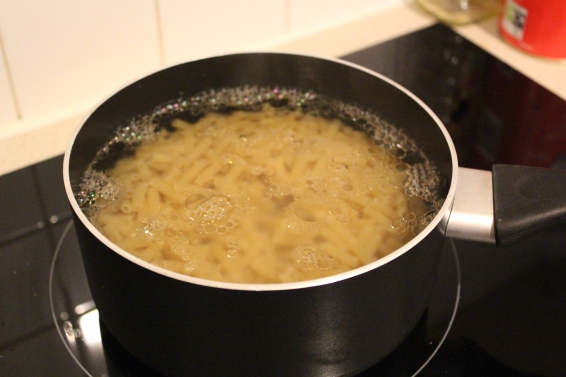 I always start by putting the pasta on to cook – aside from the actual baking part this is normally the next longest step so getting a head start on this helps. I prefer macaroni but you can use penne or really whatever pasta you like best! 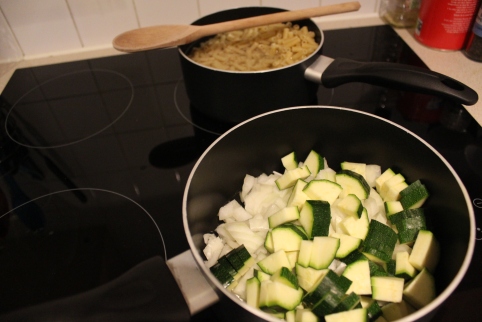 Officially most recipes start by making some kind of tomato/meaty sauce which dumbs down in my brain to simply ‘bolognese’. As I end up eating this all week I like to make myself at least think I’m being slightly healthier by including some veggies in at this stage from mushrooms and courgette (zucchini) as shown to sweetcorn and peas. Again, entirely optional! 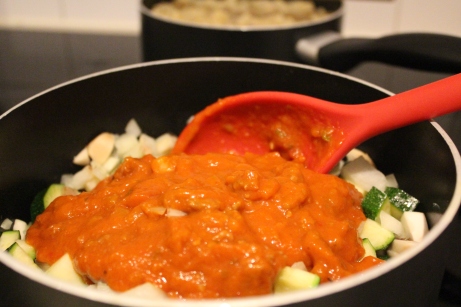 Now in my defence the first time I made this I made the meat sauce entirely from scratch and the overall process ended up taking close to four hours. However as I am lazy I have resorted to buying fresh store-made sauces to speed things up. If you’re veggie you could use a plain tomato sauce and maybe something like Quorn mince or just be creative, it’s one of the reasons I love Pastitzio so much – it’s really flexible. Anyway after cheating on the recipe in this case and adding my store-bought sauce I leave this to cook as per instructions and move onto the next steps. 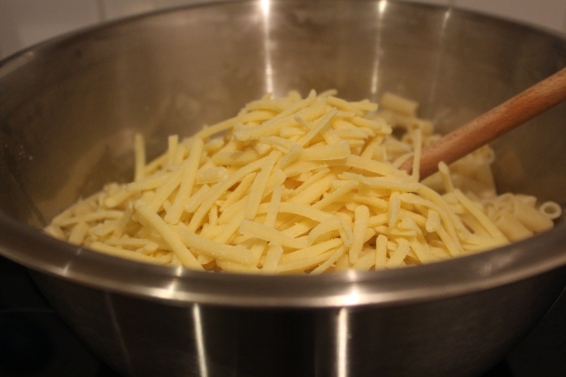 Ideally your pasta will be cooked at this stage and you can drain it and transfer it into a large mixing bowl. Copious amounts of shredded cheese is then added (cheddar is fine though I often add mozzarella too!) and mixed in while melting against the hot pasta. You do need to make sure you mix this well as you want to avoid large clumps of melted cheese stuck together – even consistency is what we aim for!

In a large deep oven tray start by pouring in your tomato/meat/bolognese sauce at the bottom, hopefully covering the entire dish. Next, you add your melted cheese/pasta mix on top spreading it out as evenly as possible on top of the sauce. Some recipes definitely differ how you layer this pasta bake up but this is just the way I’ve always done it!

The next part I’ve never quite got the timing down on – in theory this should be going on while doing the last few steps but I always end up starting after I’ve layered up the sauce and pasta. So onto this next part: 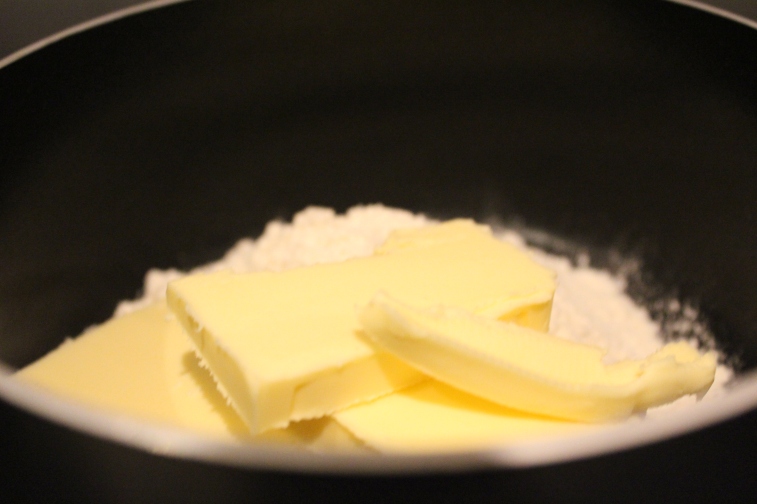 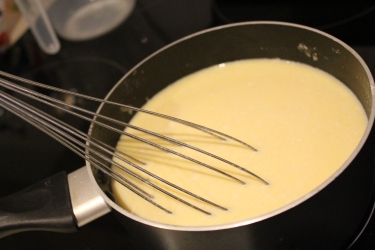 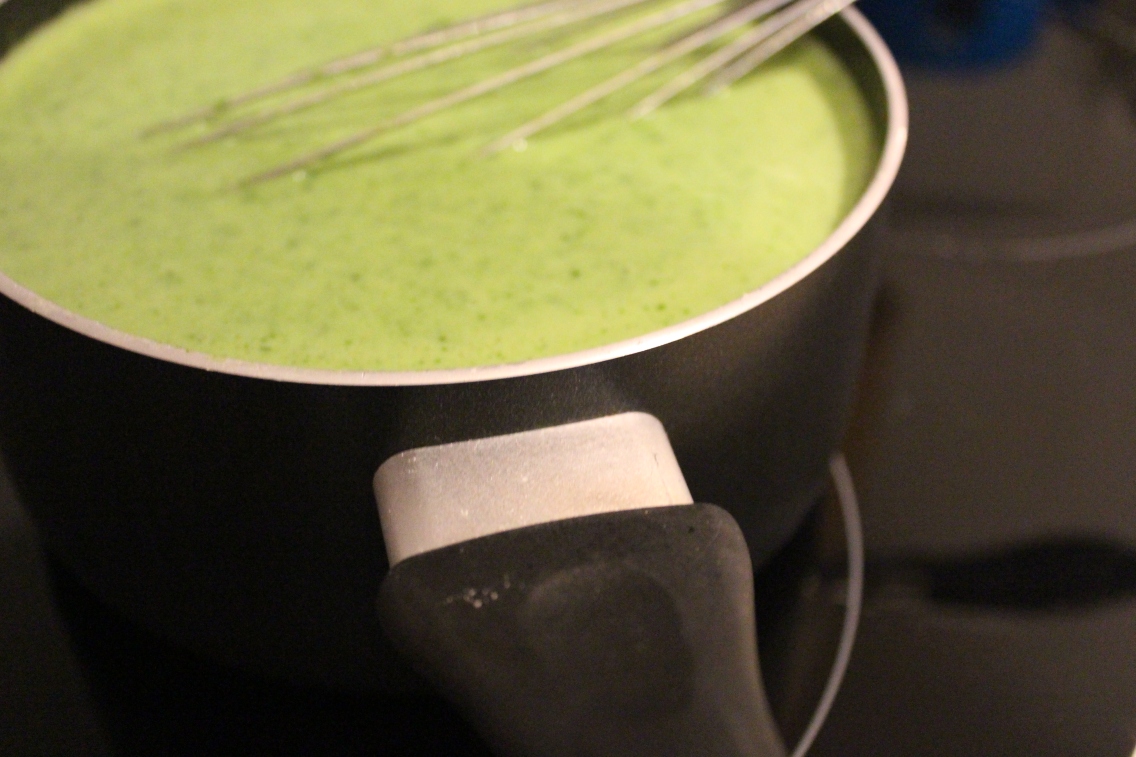 Basically, you make a bechamel sauce. This consists of melting butter in a pan and mixing in flour to make a paste then slowly adding milk while stirring constantly to avoid lumps (using a whisk helps). This slowly thickens to make a white sauce. In my photo you’ll notice my sauce is decidedly green, this is because I decided to add kale into my sauce (again tricking myself into thinking I’m being healthy). Side note: Some recipes also call for an egg yolk to be added into the sauce, I haven’t included this because I forgot this time but I didn’t find it made a large difference – but then I’m no Gordon Ramsay either! Once made, this sauce then gets poured over the top of pasta to cover the entire baking dish and the entire thing goes in the oven for a good hour (ish). The final outcome will normally have a golden crust to it!


I usually let the whole thing cool down before dividing it into Tupperware and into the fridge ready for a week at work. Like I mentioned before it’s also great for freezing if you won’t eat it all in a week.

Hopefully I may have now somehow inspired you to try it yourself – let me know how your Pastitzio turns out!